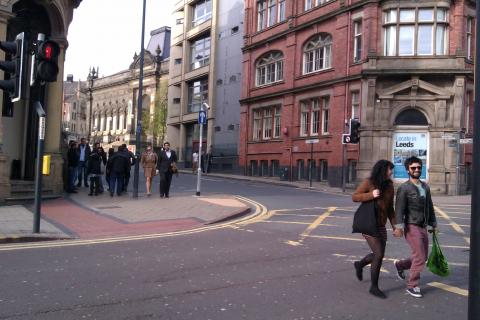 Big news yesterday: the plans to put a contraflow cycle lane along Cookridge Street has finally been approved by Highways Board and the scheme looks likely to be built in the autumn!

For anyone not familiar with Cookridge Street, the bit we're interested in is a short street joining the Headrow to Millennium Square, alongside Nicola Adams' gold post box and Leeds Cathedral. It's a well recognised desire line for cyclists, as it provides a North-South link between the railway station, and the universities and towards Otley Road. However, until now the route has been one way Northbound, meaning legal routes south through the city centre are either convoluted or pedestrian. There have been plans for a Southbound contraflow for literally 10 years. And I do mean 'literally' in the old-fashioned sense.

Now it looks like turning from fantasy into reality, thanks to some excellent work by Leeds City Council's senior planner Tim Parry who has been liaising tirelessly with hoity-toity cyclists (your representatives Lizzie and Graham, of the Leeds Cycling Campaign committee) and concerned members of the National Federation of the Blind (who were understandably worried about an earlier proposal for contraflow on the wrong side of the road with not enough clarity about the pavement-cycle lane boundary).

The new plans (an earlier incarnation is actually featured in the moving pictures at the top of our homepage) are for a cycle-safe crossing of the Loop road on the Cathedral side of the Great George Street / Cookridge Street junction, leading to a lovely cycle contraflow on the left (intuitively correct) side of the road, all the way down Cookridge Street to a lovely new cycle-specific traffic light at the junction of the Headrow and Park Row. From there you're within sight of the railway station, Boar Lane Eastbound and Wellington Street to the West. Happy days!